Rescue Cat Grows Up Into A “Vampire”

Meet Monkey! This black kitty has Dracula teeth and looks just like a character from a Halloween movie. Monkey is a rescue cat who lives with his owner, Nicole Rienzie, in New York. The story of how they met can be called a fateful encounter. Rienzie was in a car on her way home when her mother nearly hit a black kitten. They hurriedly got out of the car to check on on animal, and what they saw was a fragile kitten covered in bugs and dirt. The infection on his eye was so severe that he could barely see where he was heading. “At first I tried to find him a home but I realized how much our meeting was divine alignment. I needed him just as much,” Rienze told LoveMeow.

Soon after Renzie adopted the cat, his teeth started to grow, and she realized the cat was special…

Monkey’s canines kept growing and getting longer and longer, until the feline started to look like a little vampire. Rienze started to worry, so she took Monkey to the vet who told her the cat was completely fine.

It seemed there were some uneasy comments about Monkey’s look. “When people look at pictures, a lot of the time they think they’re fake,” Rienzie says. “I’ve had people say they’re Photoshopped. But they’re not – they’re just his teeth. They’re always very surprised, wondering why they’re like that.”

Meet Monkey, the black cat with Dracula teeth who looks just like a character from a Halloween movie. 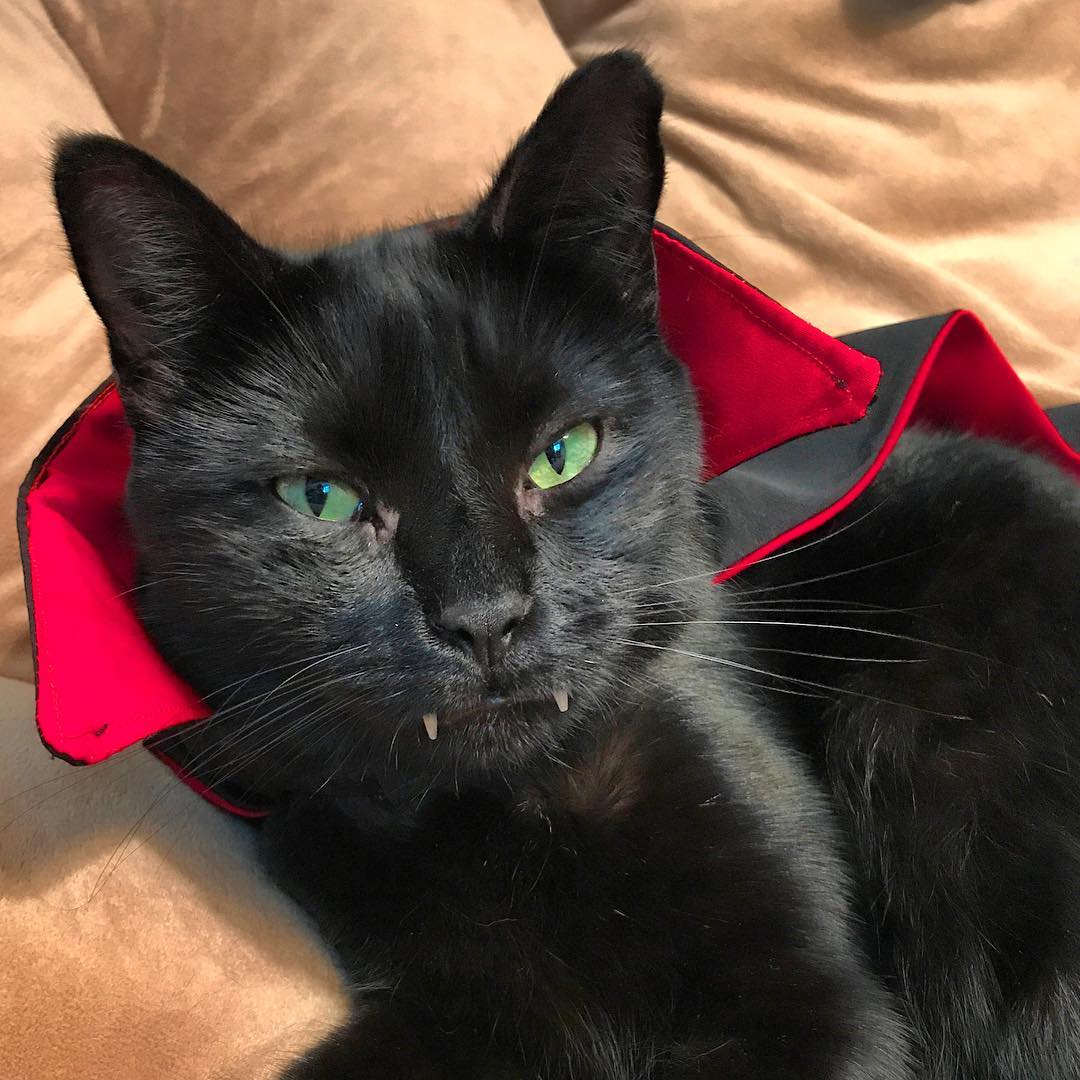 He is a rescue cat who lives in NY State with his loving owner – and his teeth are for real. 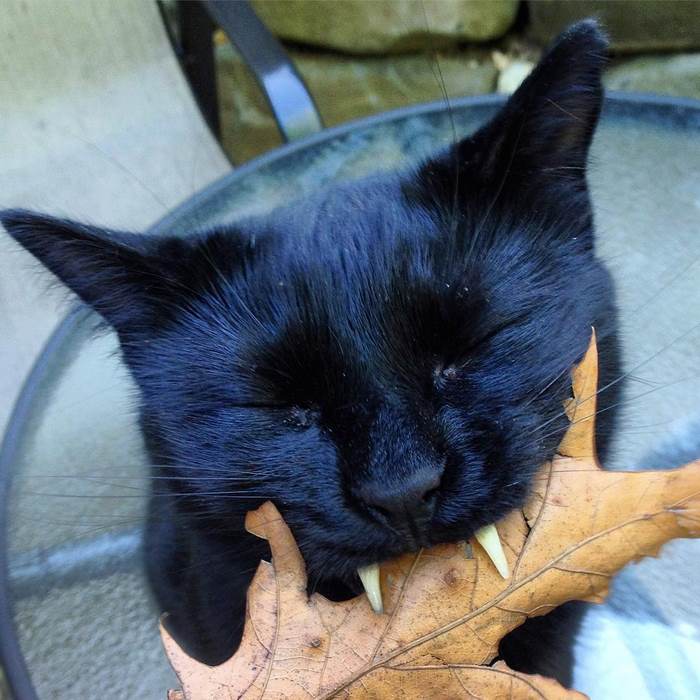 His human Nicole Rienzie was in a car that nearly hit the black kittie, so she decided to see if the cat was ok. 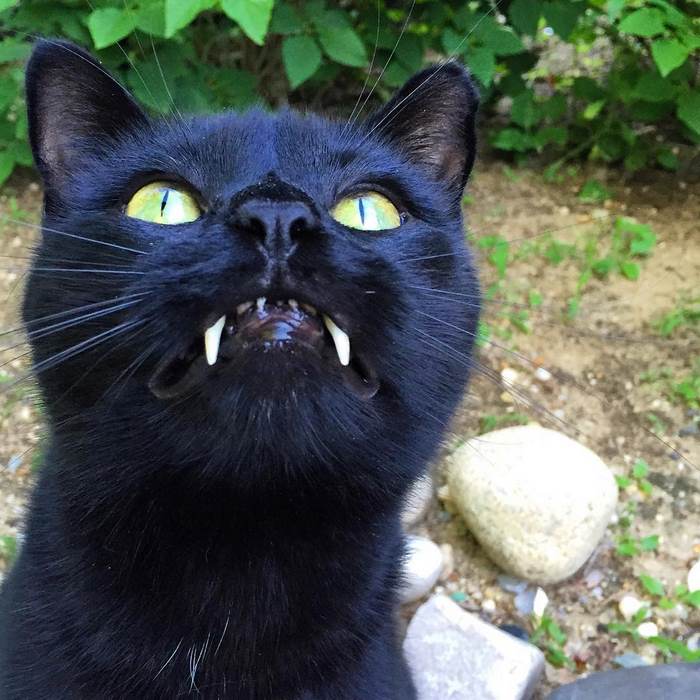 She saw that the feline was malnourished, covered in bugs and dirt, and had a huge eye infection. 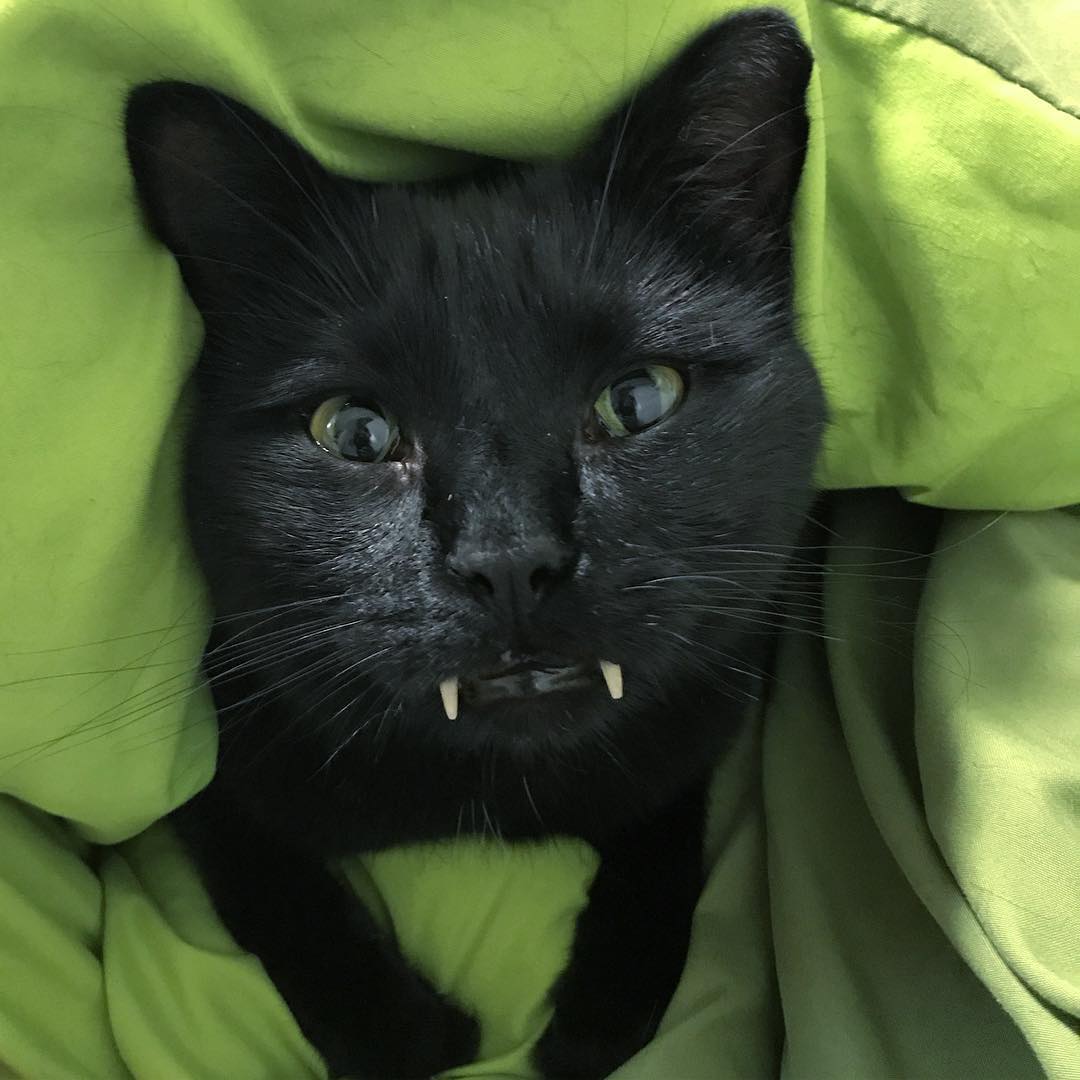 Rienzie decided to adopt him. Soon she realized there was something special about Monkey… 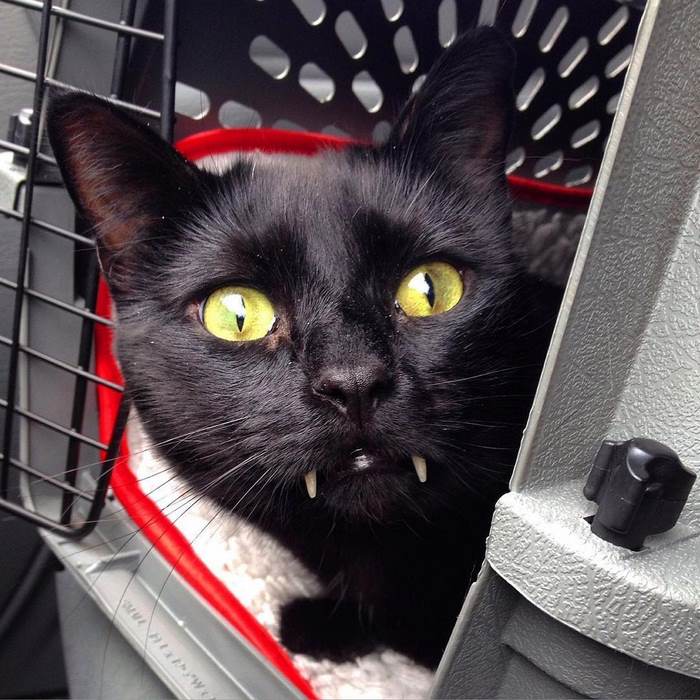 Monkey’s canines kept growing and getting longer, until the feline started to look like a little vampire.

Rienze started to worry, so she took Monkey to the vet who told her the cat was completely fine. 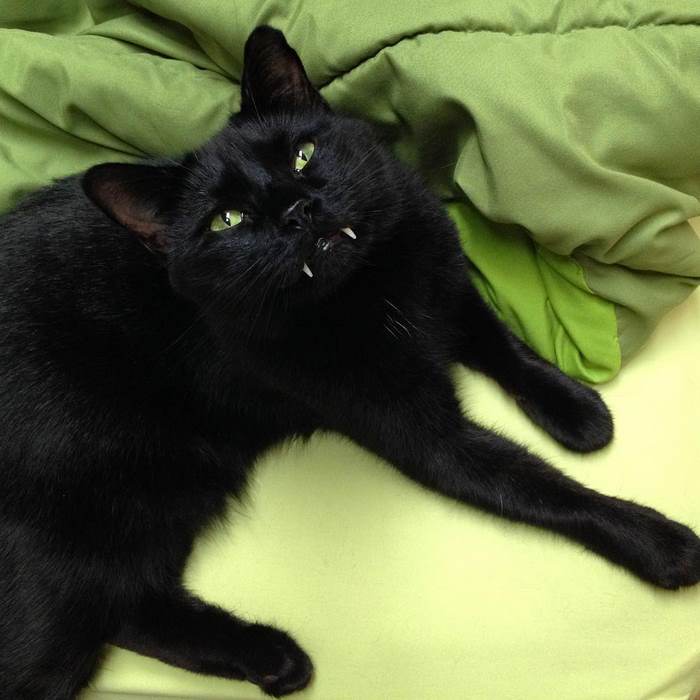 The long ‘vampire’ fangs in cats are rare, but it does happen – and Monkey is the proof. 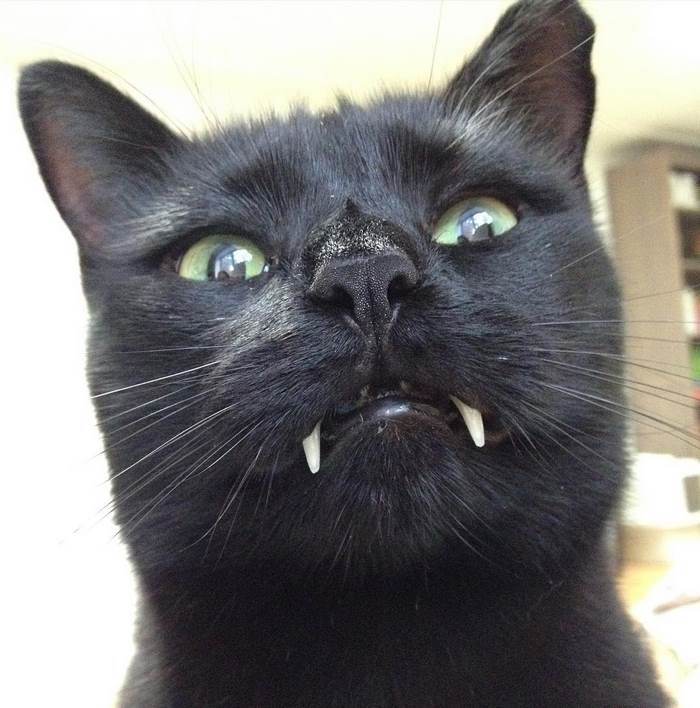 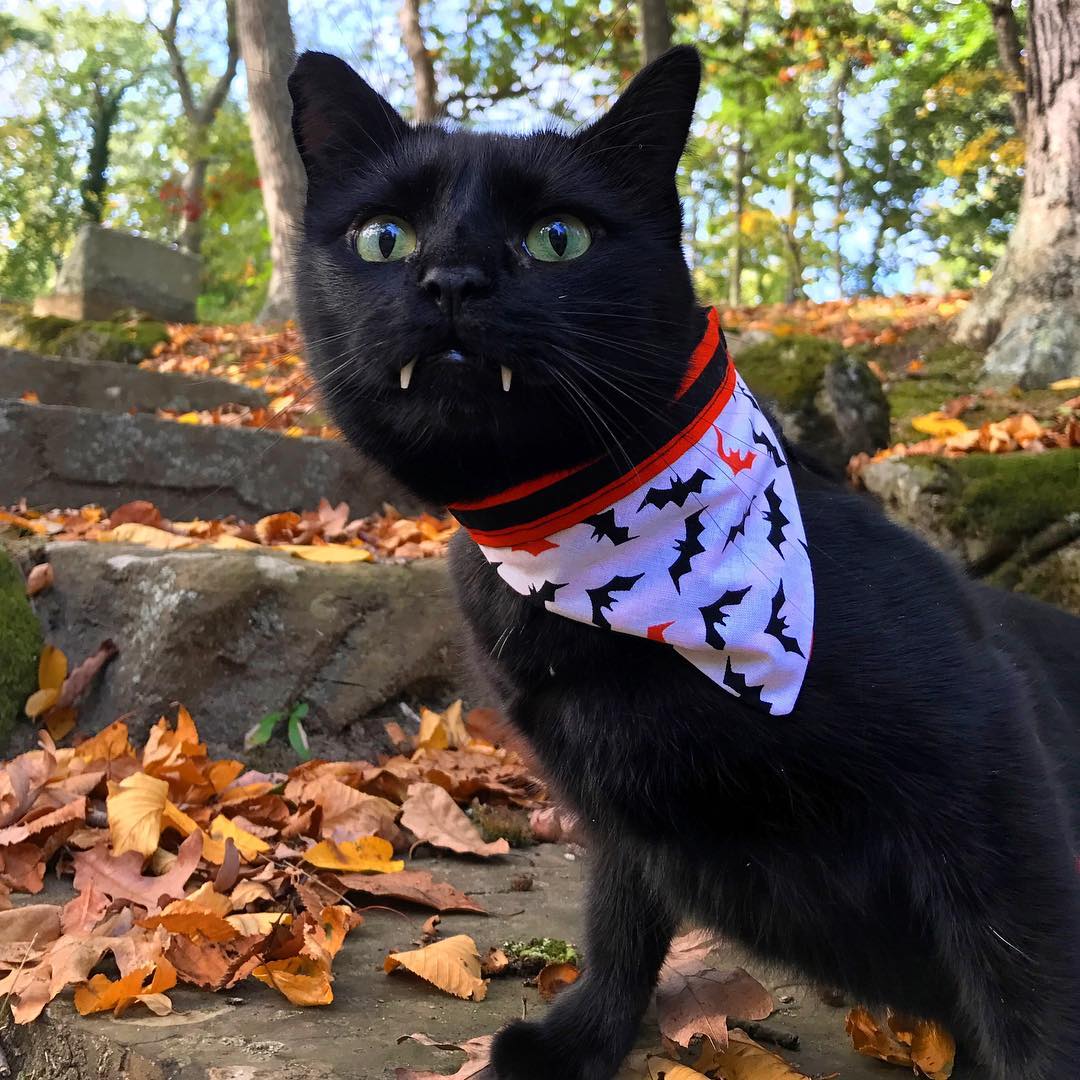 Well, they’re not – the vampire cat is real and, according to her mom, he’s adorable and likes to lick a lot! 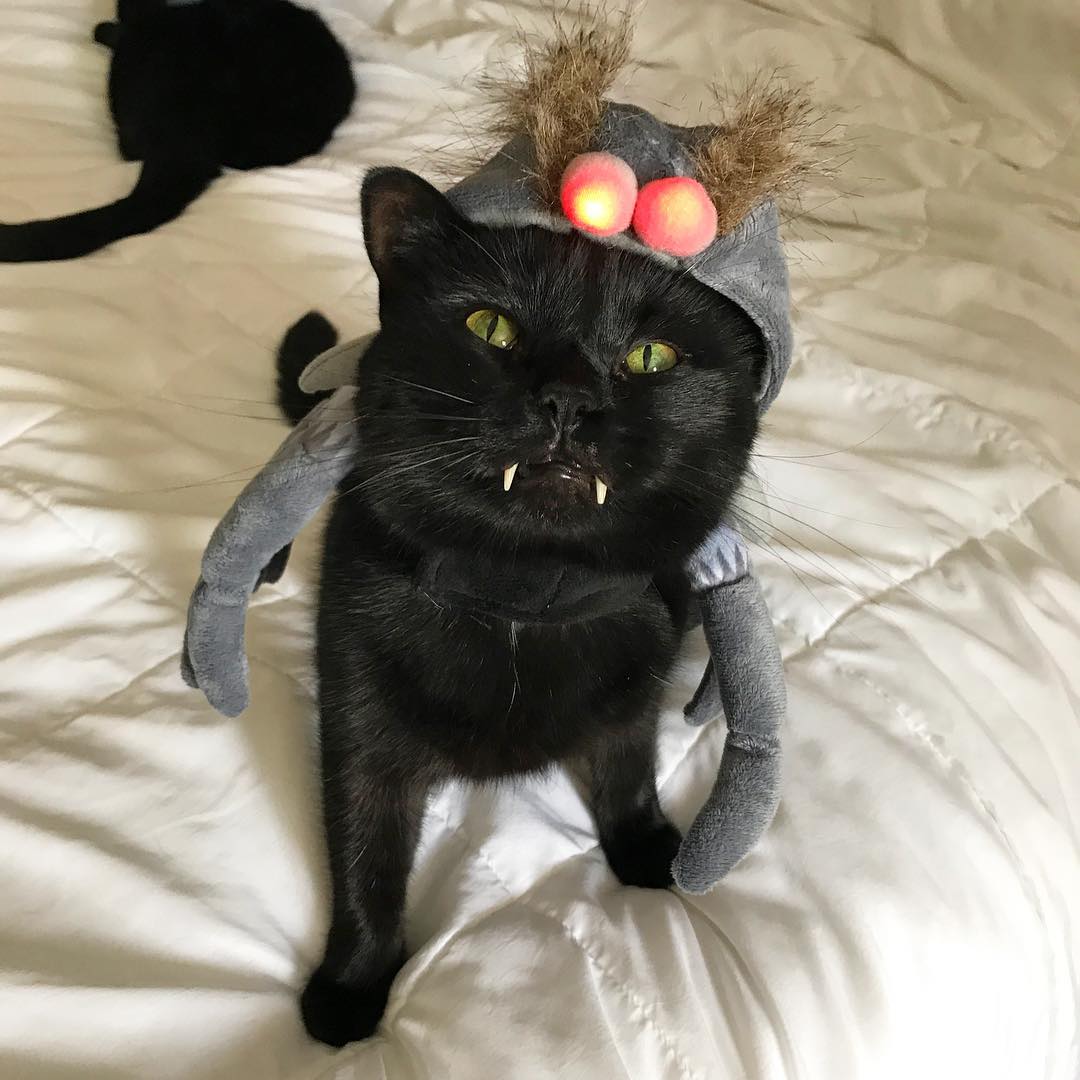 Share this story and spook your friends on this Halloween with the “Vampire” kitty!