A heartwarming story, from fear to trust, of a stray cat, Princess and her kitten, Casper.

Meet Princess, the stray cat that lost her kittens but was lucky enough to find a kind couple that gave her love and a place called home. 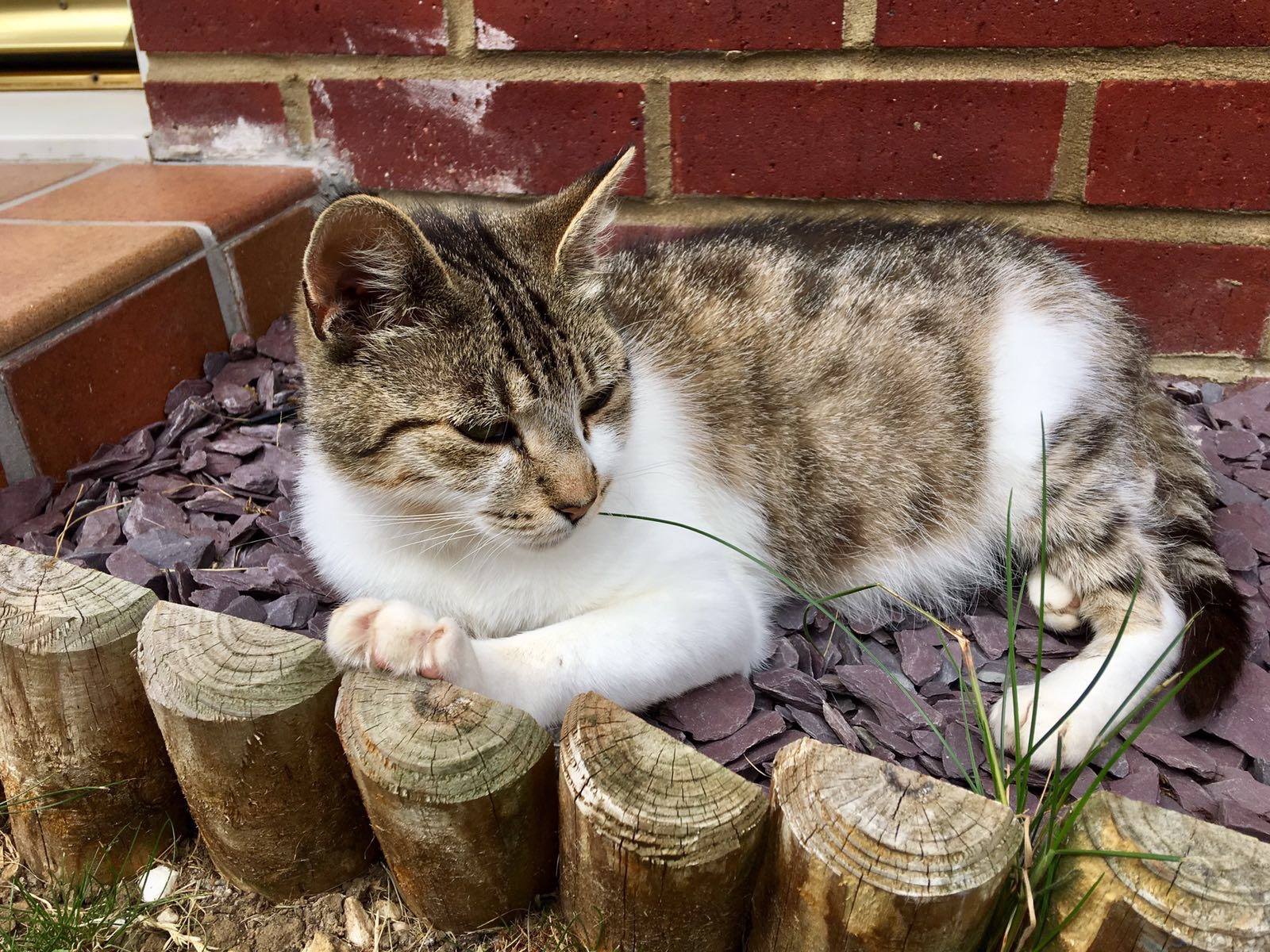 “I first saw Princess in May 2017 as nuisance cat who hung around the street ripping open rubbish bags and stealing scraps.”  AJ Cousins told Viral Cats.

“A couple of days later I saw that she was in the neighbours garden playing with three young kittens around 4 weeks old, and noticed that she kept returning to a bush on our driveway with the kittens. That evening I told my husband about the Princess and the kittens, so we went over to the bush to have a look. We saw that she was in the bush with the kittens so went into the house and opened a tin of tuna and poured a bowl of milk and went back to the bush. Princess came out from under the bush and hissed at us, but was grateful of the food.

For the next few days we put milk and food by the bush and each day she would get more and more brave by coming out and eating without seeming scared. That first day was the one and only time in 6 months she has ever showed anything but love. After a few days we noticed that Princess had moved her kittens to underneath another neighbours garden shed, but as soon as she heard us she would come out to say hello. As we continued to feed her she would come out and eat but always leave a small amount of food. Once we went inside the house we watched her call her kittens who then came out to eat the food she had saved for them.

Over a period of about 3 weeks we gained her trust. She would eat in front of the door and would call the kittens to come eat with her. However, the kittens remained very timid and would run away if we tried to see them. Although they were quite happy to play in front of the house providing we watched from the window.

To gain access to our house, Princess and the kittens had to cross another neighbours back yard and crawl under fencing. During the act of doing this they came to the attention of the neighbour whose garden it was. The next day the neighbour came to the door to tell me that she had reported Princess and the kittens to the RSPCA, who would be coming to catch them. Whilst we were sad to think of them being taken away we feel it was for the best as we couldn’t look after four cats! Also, as we rent our property, pets are frowned upon by the letting agent.

About a week later the RSPCA called to inform us that they had caught the kittens but could not catch Princess, and as such took the kittens away leaving Princess behind. They said they would return later for Princess but that was 5 months ago!

Later that day we opened the door to find Princess on the doorstep crying for her babies with an absolute distraught look on her face. We took a photo of her and she was obviously heartbroken and devastated as she hasn’t understood where the kittens have gone. It was also at this point that we suspected that Princess was pregnant again.” 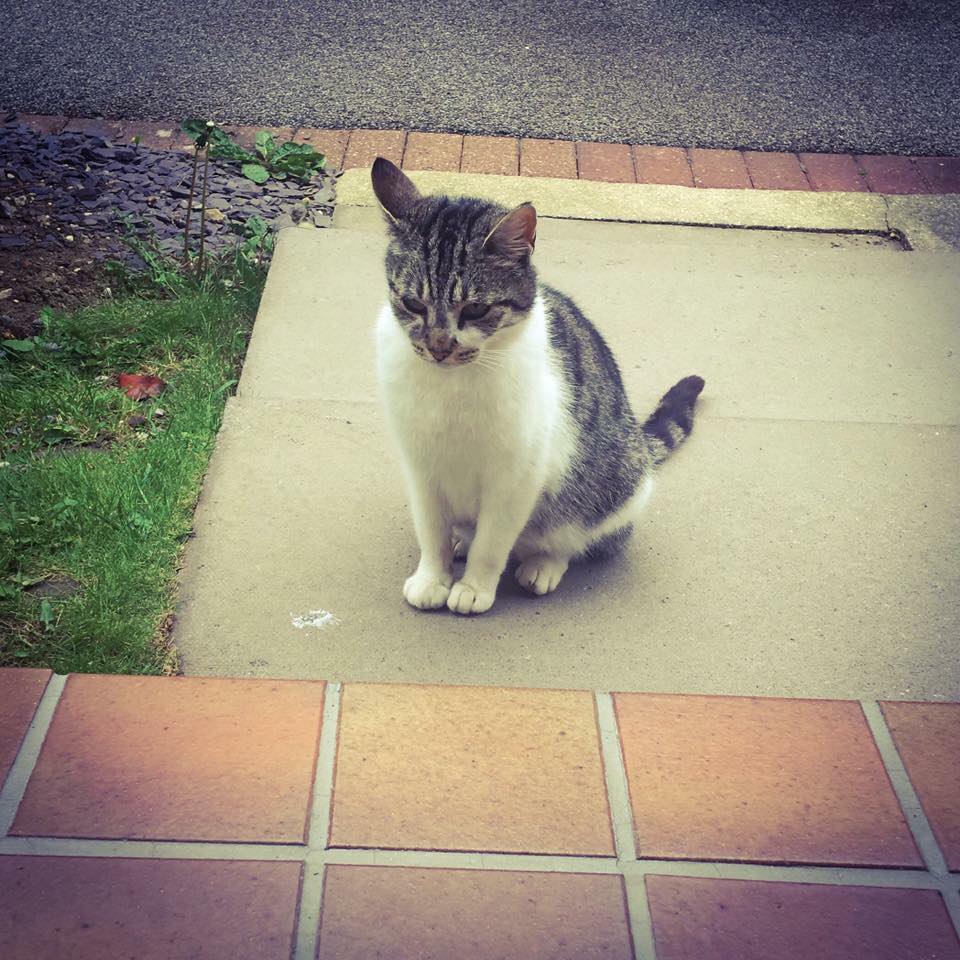 “Over the next few weeks Princess spent more and more time around the house but would never really come any further than the doorstep, but she was being loved and eating the best food and treats, so we named her Princess and she had gone from Rags to Riches. She had become such good friends with me that she would go for walks with me and when I was outside she would always be next to me with at least her tail touching me, and would happily pose for photos. But still she would not come in the house. It also became obvious that Princess was definitely pregnant again.” 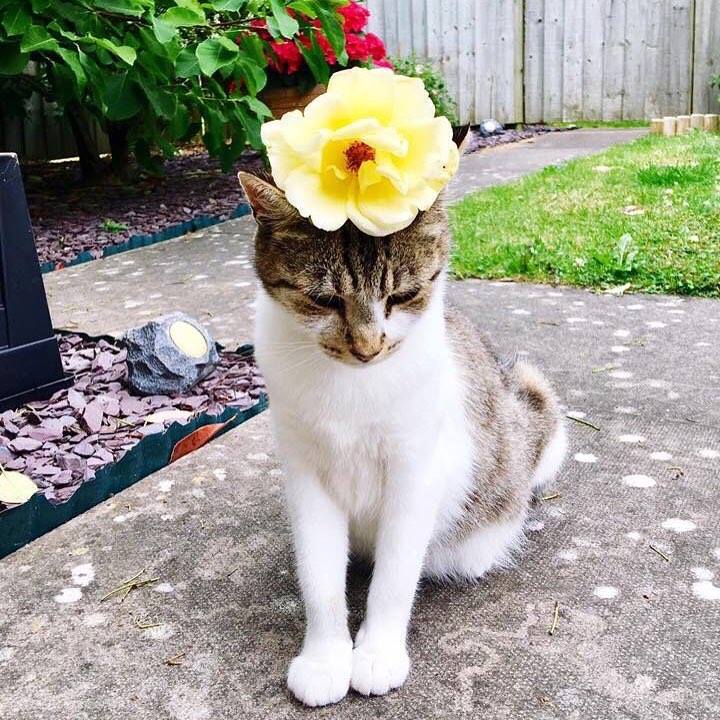 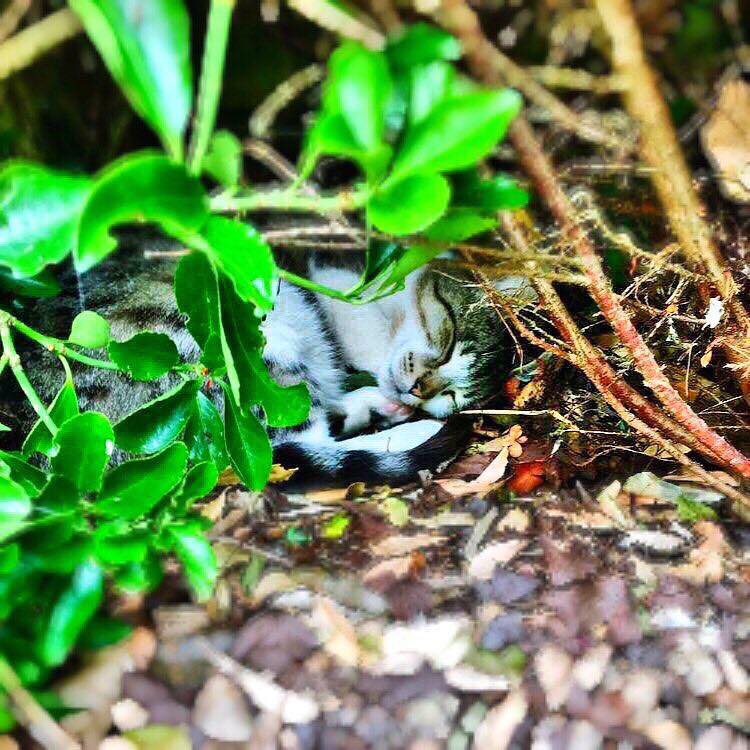 “On 19th July 2017 there was a thunderstorm in the evening so we opened the door to check if Princess was OK. On opening the door Princess ran straight past us into the house, ran up the stairs and climbed into a laundry basket that was there. As it was such horrible weather we left her there to sleep. In that night she gave birth to Casper.” 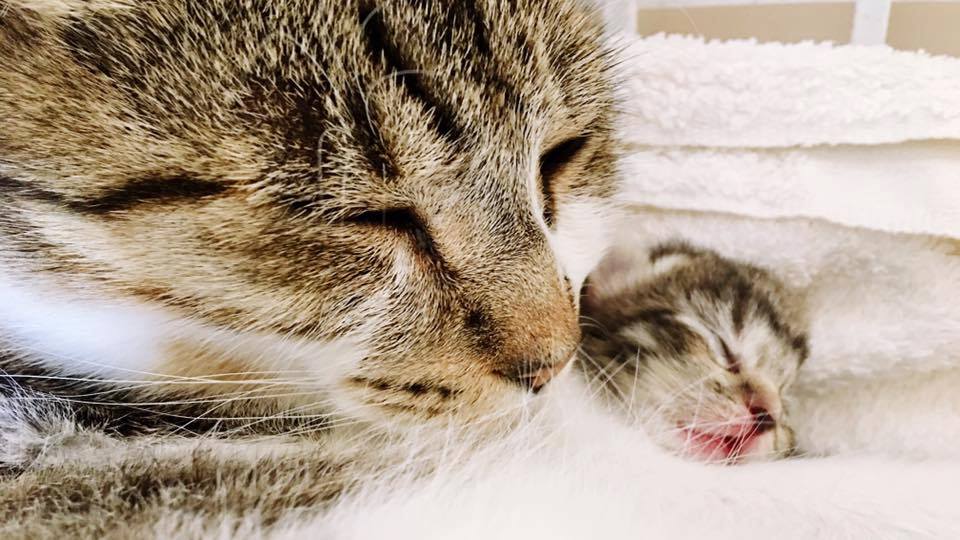 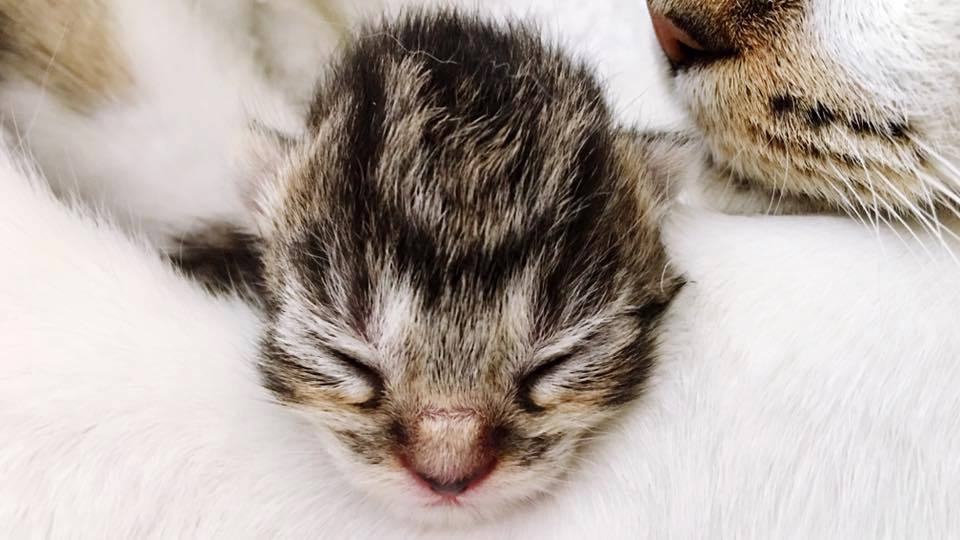 “Three months on and we have definitely been “adopted” by Princess who has never left the confines of the house and surrounding area of the garden and neighbours gardens. Casper is a healthy happy boy who is so smart. He is a fast learner who loves to play. He is constantly running up and down around the house, in and out from room to room. He also loves to play wrestle with his mother.” 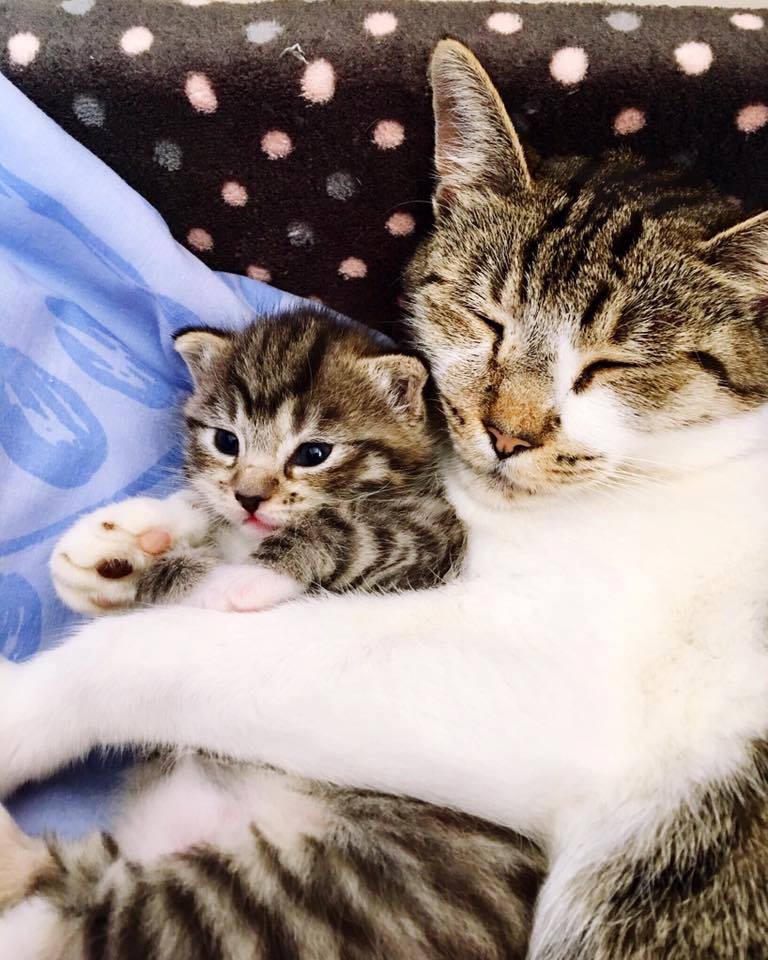 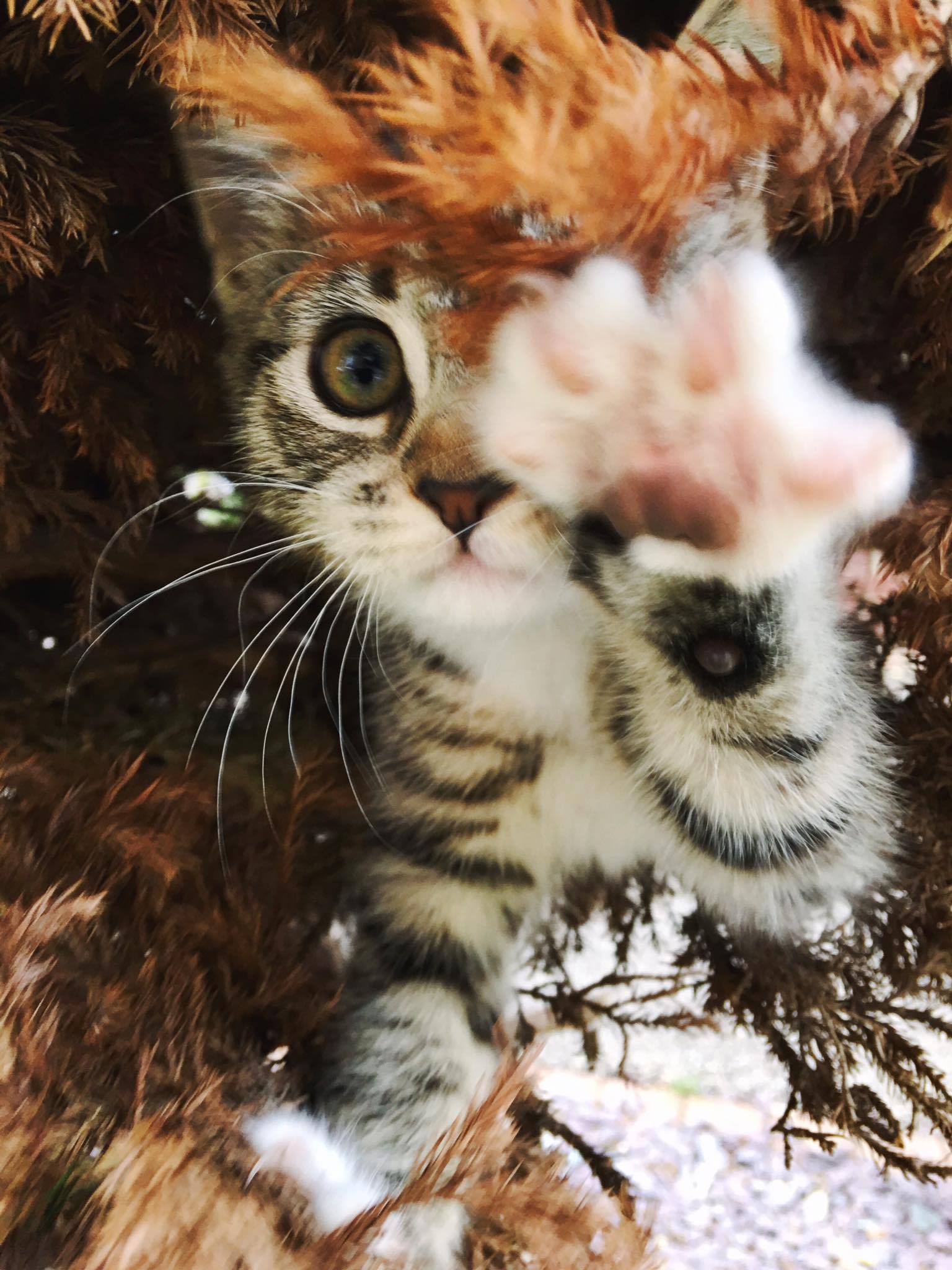 “The one time you see Casper quiet is when he’s asleep.” AJ Cousins told Viral Cats.

“He’s such an adventurer that in the last week he has mastered climbing an eight-foot fence, jumping into a tree, climbing from there onto the roof of the neighbours shed, then onto the roof of the garage where he sits at the apex looking at everyone. Both Casper and Princess know their names and come when called, and wherever one is the other is never far behind.” 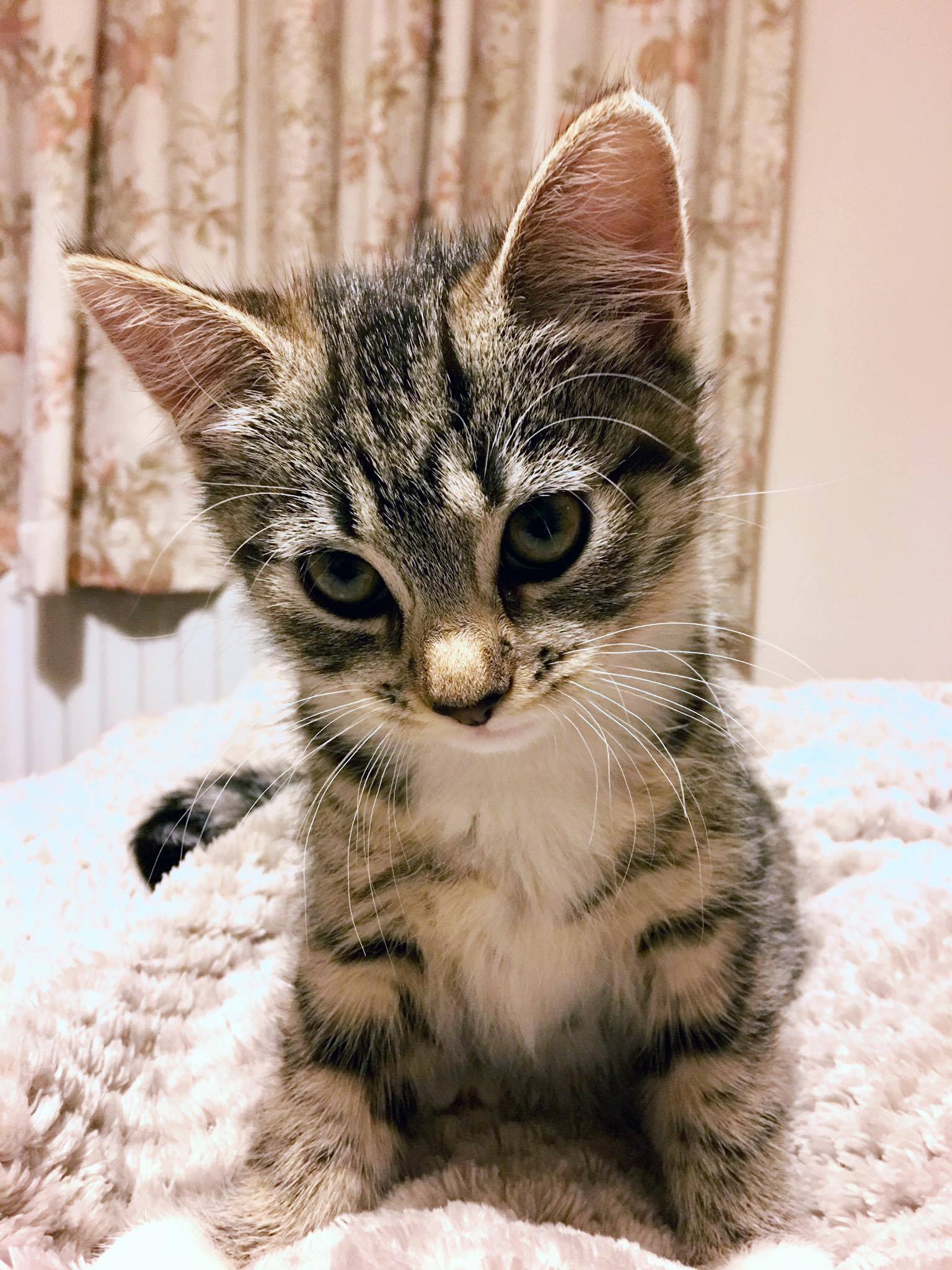 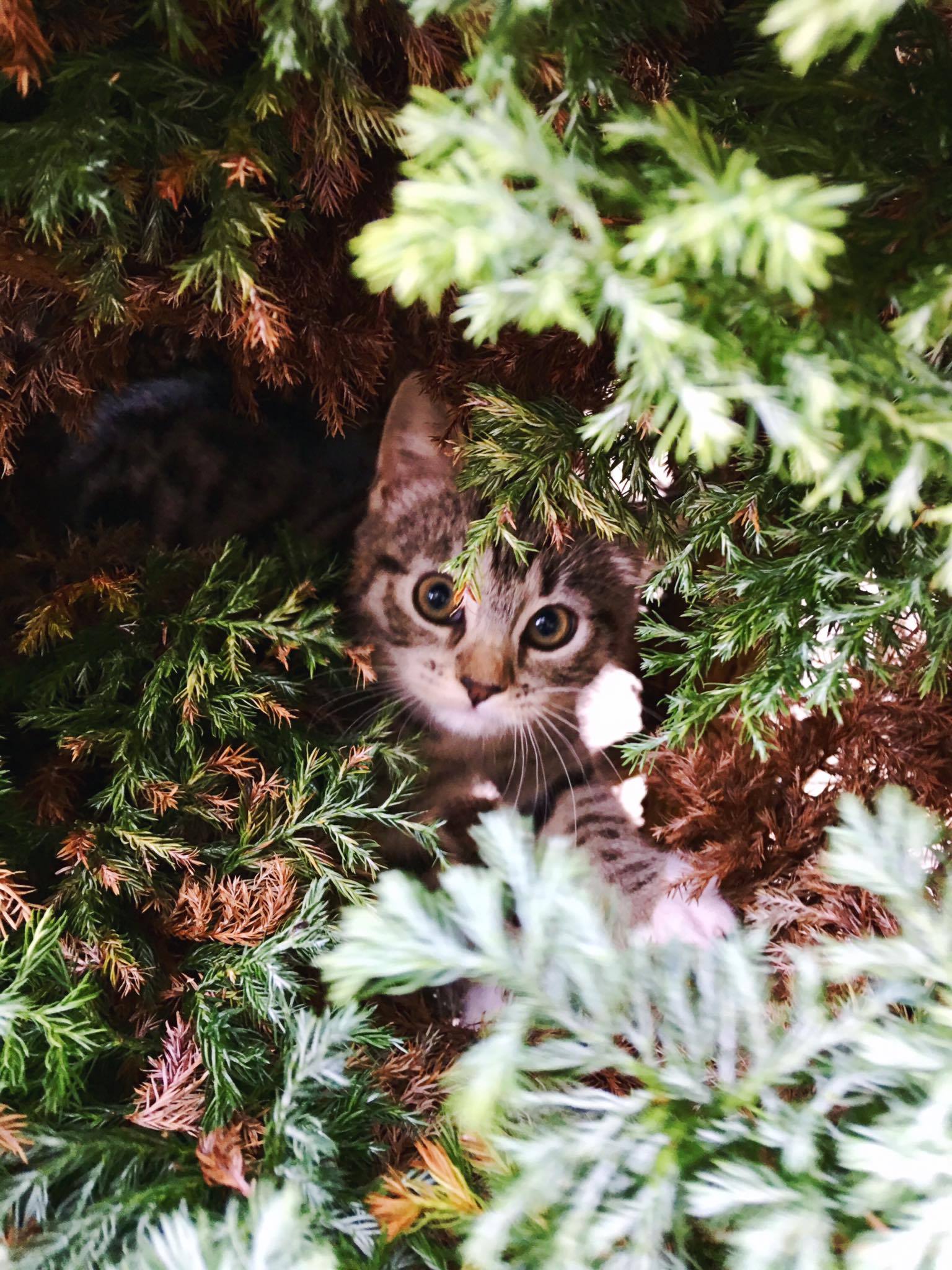 “He’s a little cat with a big personality” 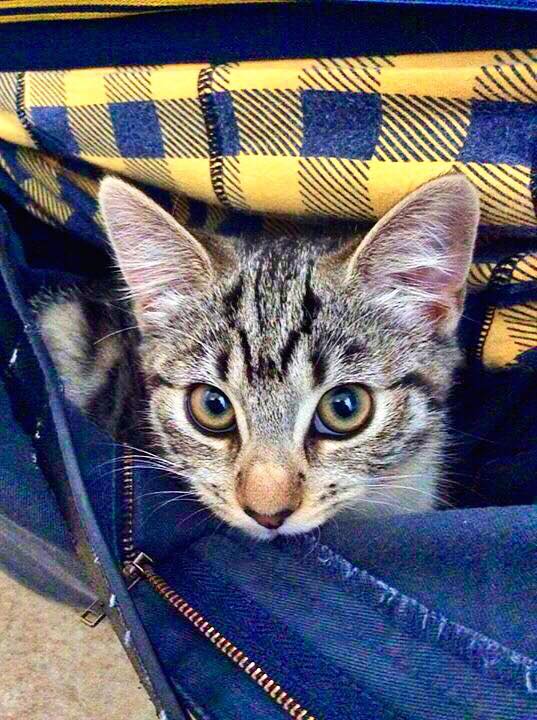 Photos, videos and story credit goes to AJ Cousins. Thanks for sharing this beautiful story with us!